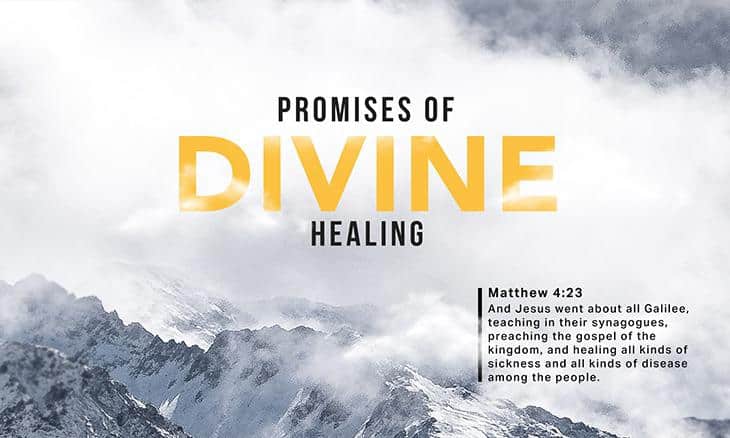 There are prominent Bible teachers and pastors who deem it their sacred duty to caution Christians regarding the doctrine of divine healing. Though they say that they believe in healing, they claim that God’s healing promises are not for everyone, not even those who come with great faith, unless it is His specific will to heal certain individuals.

Since very few people, or none at all, have ever been healed in their churches, they simply conclude that all the healing promises in the Bible must be null and void today because the days of miracles are over. Consequently, they have to suppress the numerous passages on miracles and healing that keep popping up each time they read the Bible.

It must be wearisome for them to keep reminding themselves, “These wonderful miracles are not meant for me. They were for the Old Covenant believers and the early church. But somehow they are not applicable to Christians like me who live in the New Covenant which is supposedly anchored on new and better promises.”

According to their belief, our prayer for healing should be, “Lord, please heal me if it’s Your will.” After all, they argue, Jesus prayed that way.

Here’s the context and perspective of Christ’s agonising prayer in the Garden of Gethsemane. As He anticipated the horrendous torments He had to undergo for us, especially the brief abandonment and severity from Father God because of the tremendous weight of humanity’s collective sins upon Him, the agony became almost too unbearable.

At that point, an angel came to strengthen Him (Luke 22:43) and He steeled His soul to drink the bitter cup of crucifixion in order to purchase salvation, healing and deliverance for us.

Had Christ insisted on His own will by letting the bitter cup of suffering pass Him by, we would have no hope of being saved and healed. But realising that the only way to liberate fallen humanity from Satan’s dominion was through the Cross, Christ willingly went through the whole ordeal. Thus, He has redeemed us with His own precious Blood.

Through Christ’s finished works on the Cross, we have been given all the means and promises to appropriate and claim healing and wholeness in every area of our lives. This is a progressive walk towards holiness, wholeness and maturity.

God promised the Israelites, who were under the Old Covenant, that He would be their Healer and take sickness away from their midst. If that privilege is taken away from us, then our New Covenant is inferior to the old one and God has lied! But God cannot lie! Christ upgraded His covenant for us at great personal costs!

Hebrews 8:6
But now He has obtained a more excellent ministry, inasmuch as He is also Mediator of a better covenant, which was established on better promises.

The major criterion to settle this issue of God’s will to heal believers is to determine if physical healing is included in Christ’s redemptive works. Did He redeem us from sin, the curse of His broken Law and all the dreadful consequences which include all types of sicknesses?

Isaiah 53:4-5
Surely He has borne our griefs
And carried our sorrows;
Yet we esteemed Him stricken,
Smitten by God, and afflicted.
But He was wounded for our transgressions,
He was bruised for our iniquities;
The chastisement for our peace was upon Him,
And by His stripes we are healed.

The Hebrew word for “griefs” is “pains” and “sorrows” in the King James version should be “sicknesses” in the original Hebrew language. So the sentence should read: He has borne our pains and carried our sicknesses. And by His stripes, we are healed (physical healing included).

Matthew, in his Gospel, confirms that the redemptive works of Jesus does include physical healing. In the following Scripture, notice the context of Jesus healing the sick before Isaiah 53 is being quoted.

Matthew 8:16-17
When evening had come, they brought to Him many who were demon-possessed. And He cast out the spirits with a word, and healed all who were sick, that it might be fulfilled which was spoken by Isaiah the prophet, saying: “He Himself took our infirmities and bore our sicknesses.”

The Bible states that in the mouth of two or three witnesses shall a matter be established. Here’s the third confirmation regarding God’s will to heal us.

1 Peter 2:24
who Himself bore our sins in His own body on the tree, that we, having died to sins, might live for righteousness—by whose stripes you were healed.

The Apostle Peter worded the healing promise in the most positive fashion. It is short of saying: when you are clothed with the righteousness of Christ, your healing is a done deal… you were healed! In God’s reckoning, He had already done it. So believe that you receive (Mark 11:24).

A leper, who was stigmatised by society, bravely approached Jesus for healing. Like many people, he had no doubt that the Lord had the power to heal him but he wasn’t sure if He would be willing to release His power to heal him.

So he said to Jesus, “Lord, if You are willing, You can make me clean.”

Without hesitation, Jesus reached out His hand to him and said, “I am willing; be cleansed.”

In this incident, Christ had set the record straight once and for all. It is His will to heal us so let’s come by faith.

There are many other scriptural affirmations of the Lord’s unwavering will to heal us. But through this devotional, we now have enough healing promises of God to set us in the right direction towards healing and wholeness. Begin believing and receiving His healing virtue now. 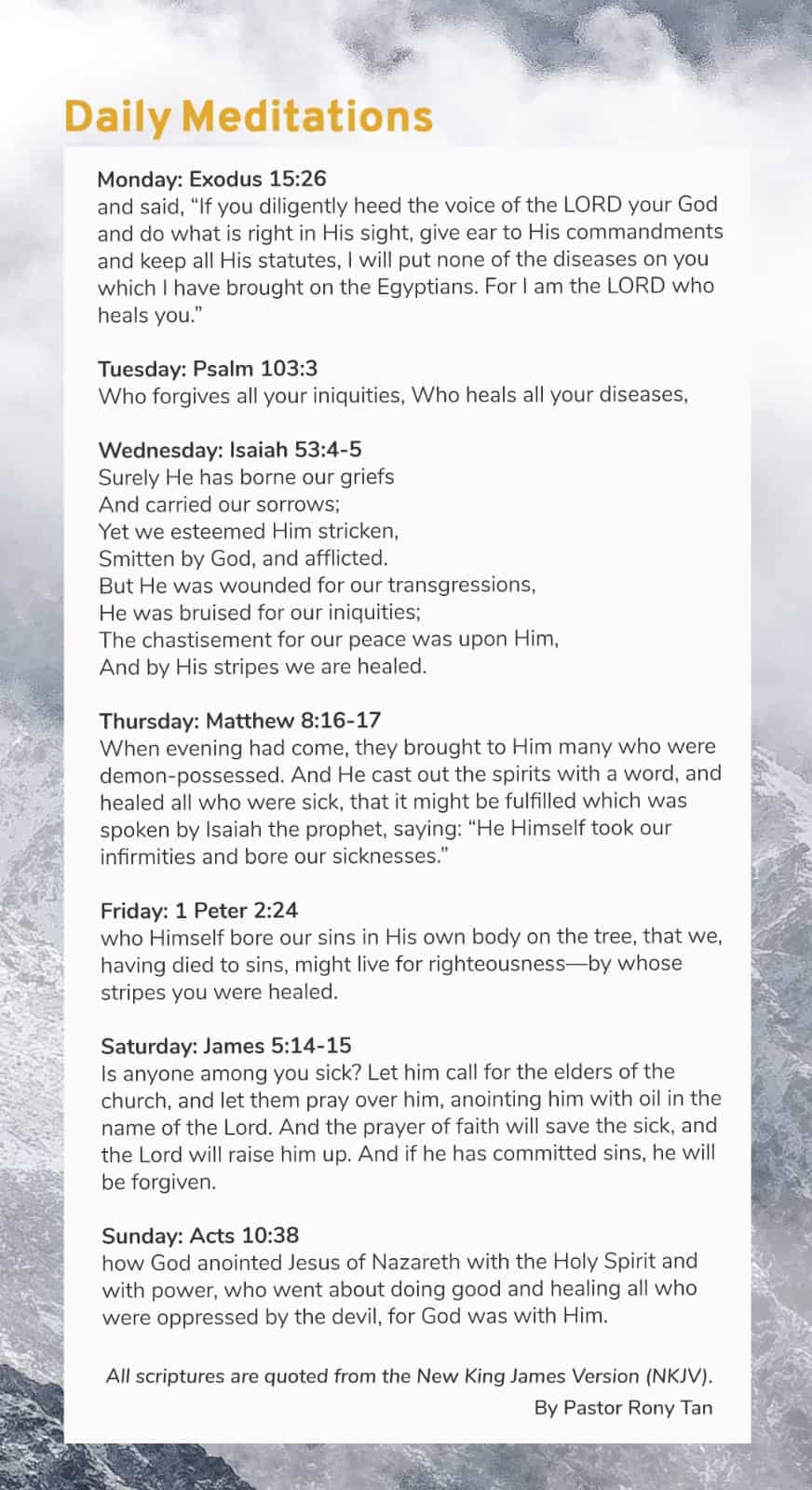