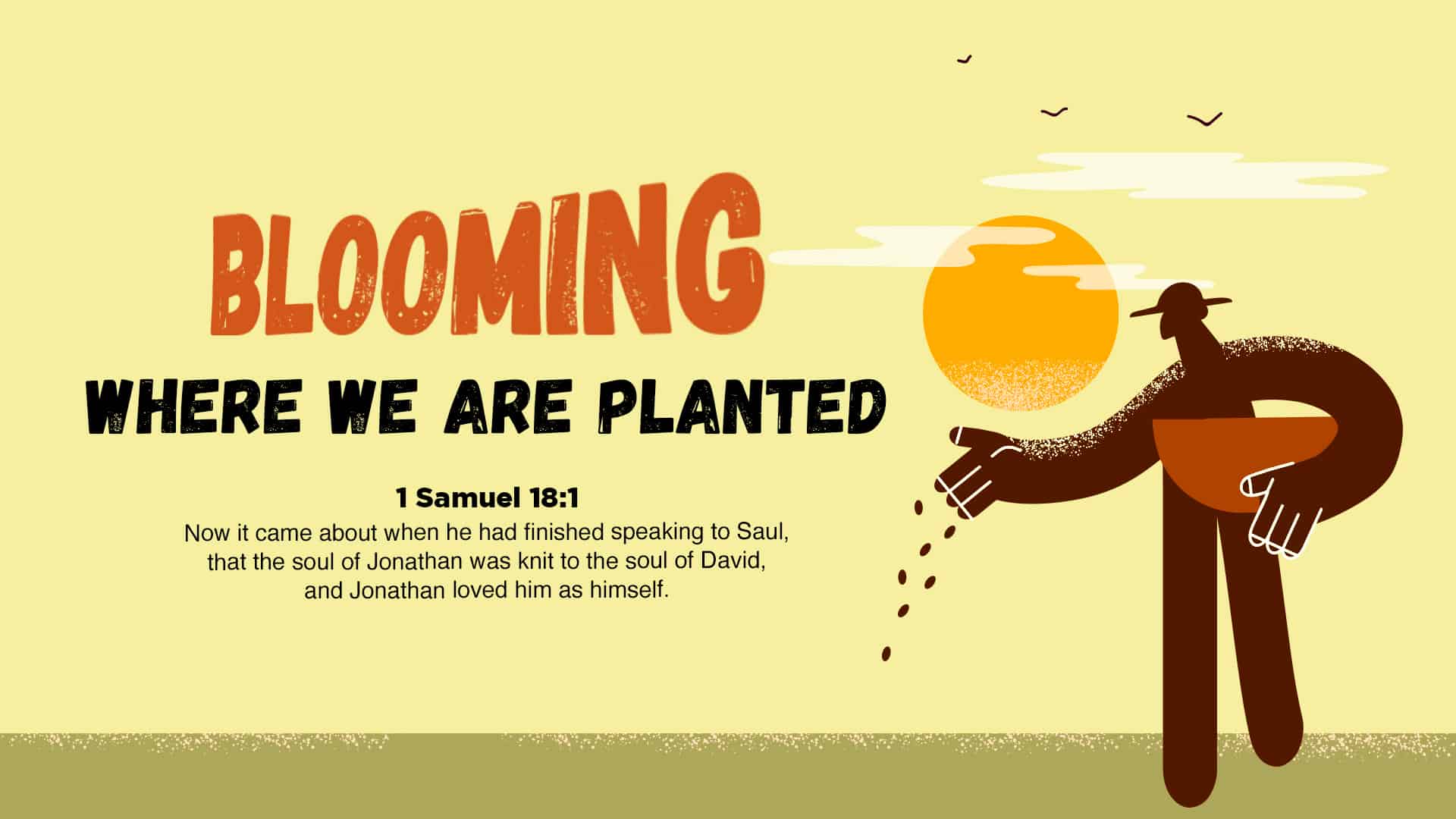 First Samuel 17 closed with David returning to Saul with the head 0f Goliath. With the scalp of Goliath, his popularity among the people rose. It was evident that the populace, especially the women, simply adored him. All except Saul. For he was threatened by his popularity. First Samuel 18:1-5 then provide us with a summary of what took place over the years after the triumphant day at the Valley of Elah.

Long before this event, David had already been ministering to Saul whenever the latter was troubled by an evil spirit. Being ministered to by the music of David’s harp, the king then kept him for his service and did not let him go home. First Samuel 18:2 now connects us to that day when Saul kept David with him. With sanctified imagination, we surmise that it was likely that during those times, Jonathan and David’s relationship developed. Hence, after the defeat of Goliath, their friendship solidified and their love for each other deepened.

We want to consider four key verbs used in 1 Samuel 18:1-5 to describe the deep friendship Jonathan and David had. In verse 1, the verb “knit” is used to describe their closeness. The word “knit” is defined as being closely linked to each other. David and Jonathan were so closely linked to each other that between them, there was no rivalry. The last we learnt of Jonathan was that he was fighting the Philistines, which he had done successfully. But, with the killing of Goliath, David’s popularity had now eclipsed his. Naturally speaking, jealousy and rivalry would have been a very normal response. Yet he was not affected by David’s reputation. He did not display any envy or mistrust. Instead, he appreciated him. His soul was so closely knit to David as if they were one person. This is the mark of a person who has self-acceptance. In life, we all need to bear in mind that there will always be someone better than us, and that we will always be better than someone in something. We should not allow God’s gifting to divide us but instead, use them to build us. We exist to complement each other’s strengths and supplement each other’s lack.

The second verb used is the word “loved.” Verse 1 says that Jonathan loved David as himself. In other words, he had a deep affection for David. By all accounts, he should have hatred for David, for he was an opponent to the throne. Regardless of what seemed like a conflict of interest, Jonathan loved David like he loved himself. This ‘love’ must not be seen in a romantic inclination, but in the context of appreciating a person who shares similar interests and purposes for God’s business.

The third verb is the word “made” in the phrase “made a covenant.” It is said in verse 3 that “Jonathan made a covenant with David because he loved him like his own soul.” There was an agreement that bound them to each other. Perhaps this was a strong pledge to watch each other’s back. Notice that it was Jonathan who initiated the covenant because he loved David like himself.

The final verb used is the word “stripped.” Verse 4 tells us that “Jonathan stripped himself of the robe that was on him and gave it to David, with his armour, including his sword his bow and his belt.” Jonathan not only stripped himself off his royal robe, but also his armour, sword, bow, and belt, and gave them to David. For us who know the conclusion of this story, this act was very significant. Jonathan was literally transferring his royal privileges and entitlement to David. He was showing preference and honour to David before himself. Only a person with an astute insight could divest himself and offer it to the person he knew who deserved them more.

In all his actions, Jonathan had shown himself to be perceptive and discerning. What about us? Do we strive to always be the first? An understanding of who God had made us to be will help us to not try and grab for power. Each of us has our place in God and in the community of believers. We must all learn to bloom where we are planted and not otherwise. As we do so, we will advance the purpose of God instead of ours.

David’s gifting in leadership was obvious. God had gifted him for the role ahead. He was successful in whatever he was assigned by Saul. The king appointed him as a leader among his men and David was a delight to the servants of Saul and his household. Like Jonathan, let us not try to fit into something we are not cut out for. Don’t be a square peg trying to fit into a round hole. Instead, be who God has made us to be. Seek to bloom where He has planted us.