One of the ills that makes pain and suffering a miserable experience is to go through it all alone. The devil often adds to our misery by deceiving us into thinking that we’re suffering alone, that God doesn’t know what we’re experiencing, or if He does, He doesn’t care! This was probably how the Israelites felt as slaves in Egypt. They had heard their ancestors say God had promised to bless them, make them a great nation and bless all the peoples of the world through them (Genesis 12:2-3, 22:16-18). But their experience as slaves told them they were a God-forsaken people and God did not know about their misery! God had forgotten them and forgotten about His promises to their ancestors.

Against this backdrop, after describing the plight of His people in the opening pages of Exodus, Scripture declares that God had heard their groaning and cry for help, remembered His covenant with their ancestors, looked on them and was concerned for them (Exodus 2:23-25).

If that was not clear enough, after catching Moses’ attention through the burning bush, God told Moses He had seen their misery, heard them crying out, was concerned for them, and was coming down to rescue them (Exodus 3:7-8). And in the same breath, just before commissioning Moses to deliver His people, God repeated that the cry of His people had reached Him and He had seen how the Eqyptians were oppressing them (Exodus 3:9). God gave this message at least three more times, in Exodus 3:16, 4:31, and 6:5!

When God says the same thing six times in succession, it is abundantly clear He wants us to pay attention to it. Indeed, He wants us to know that He sees us in the situations of our life, He hears us and He is concerned for us, and He is the faithful covenant-keeping God who will definitely intervene to rescue us or redeem us!

However, the form of His intervention may surprise us! Who would have thought that His rescue came in the form of a helpless baby who couldn’t even save himself, being reluctantly abandoned by his parents at River Nile? Hope for Israel rose when this baby was rescued and raised by an Egyptian princess. But when he grew up, he blew away any chance of helping the Israelites when he killed an Egyptian and fled for his dear life. Then again, who would have thought hiding Moses in a desert as a lowly shepherd for 40 years and breaking his self-confidence were all part of God’s redemption plan for Israel?

God will certainly intervene to rescue us or redeem us from our situation, but the way He does it may not be what we’re expecting, and may not even be apparent to us! Nevertheless, He is the sovereign loving God who sees, who hears, who is concerned, and will intervene to rescue us or redeem us. He will accomplish His purposes and work things out for our good because we’re in a covenant relationship with Him through Jesus Christ, the ultimate Redeemer!

I know a believer who worked hard for his company but he was cheated of his dues. He struggled and cried out to God for vindication, but it seemed as if the Lord did not hear his pleas for justice. The truth is God saw the injustice he faced and heard his cries for justice. This man finally decided to leave the company to set up his own little business. God blessed his fledgling company with great success, thus vindicating him. God has since been using him to bless many of the poor and needy.

I know another man. He was anxious and worried and had insomnia. He also had an anger issue, which brought much strife into his marriage and he was on the verge of divorce. In his woes, he turned to Jesus and cried out for help. The Lord saw his misery and heard his cry. After accepting Jesus he was delivered from demons, learned to manage his temper and handle his worries and was able to sleep better. He regained his wife’s trust and she too became a Christian and their marriage was on the mend. This couple has since been serving the Lord as cell group leaders for many years!

When in trouble, you’re not alone! God sees our troubles and hears our cries and is concerned for us. In fact, He’s right there with us, whether we realise it or not! And He will act to rescue us from our woes or redeem them and turn them into channels of His blessings. So trust God when you’re in trouble. Cry out to Him! He may not act in the manner you expect, but He will rescue you or redeem your situation and turn it around for your good! 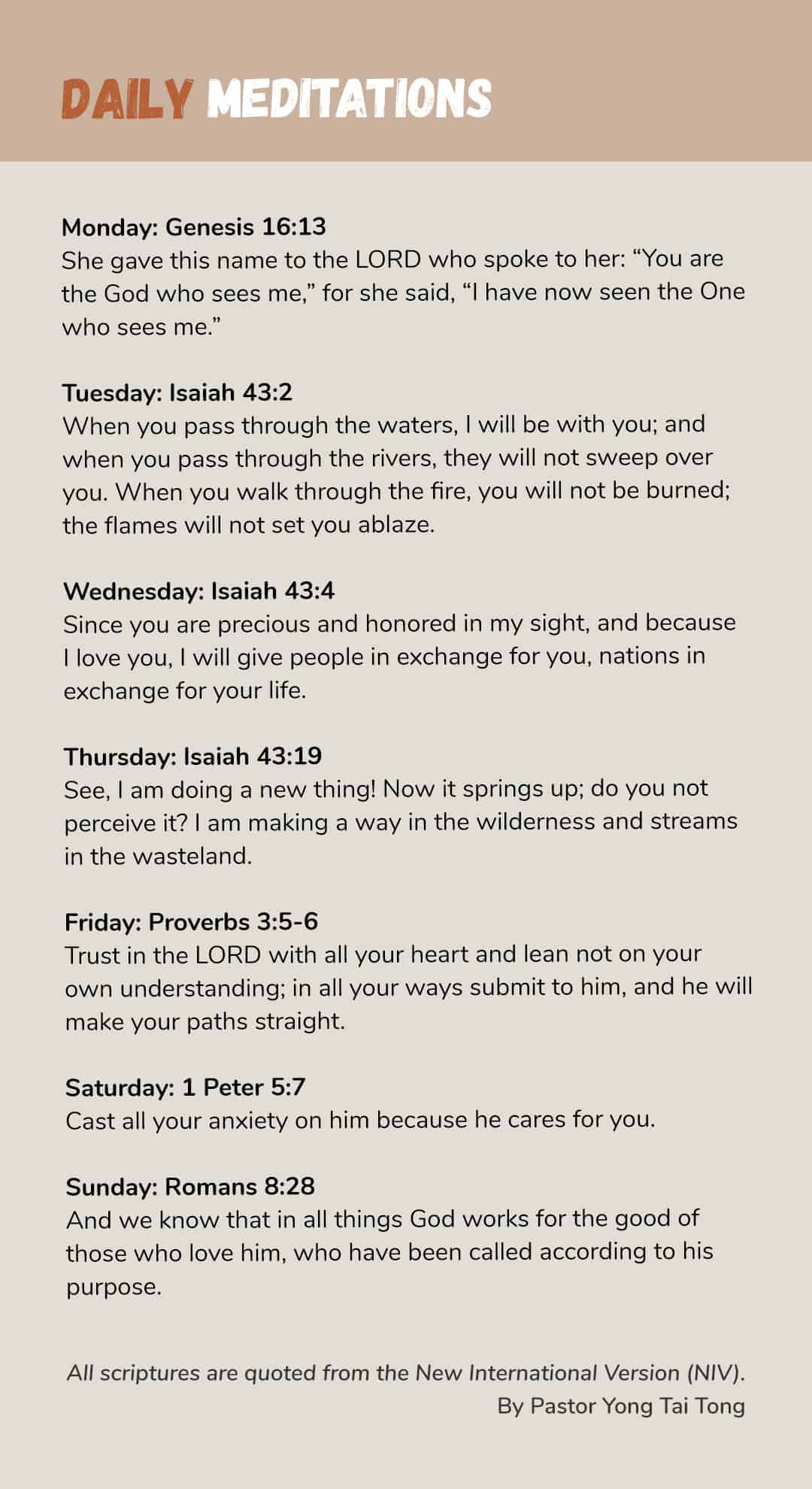